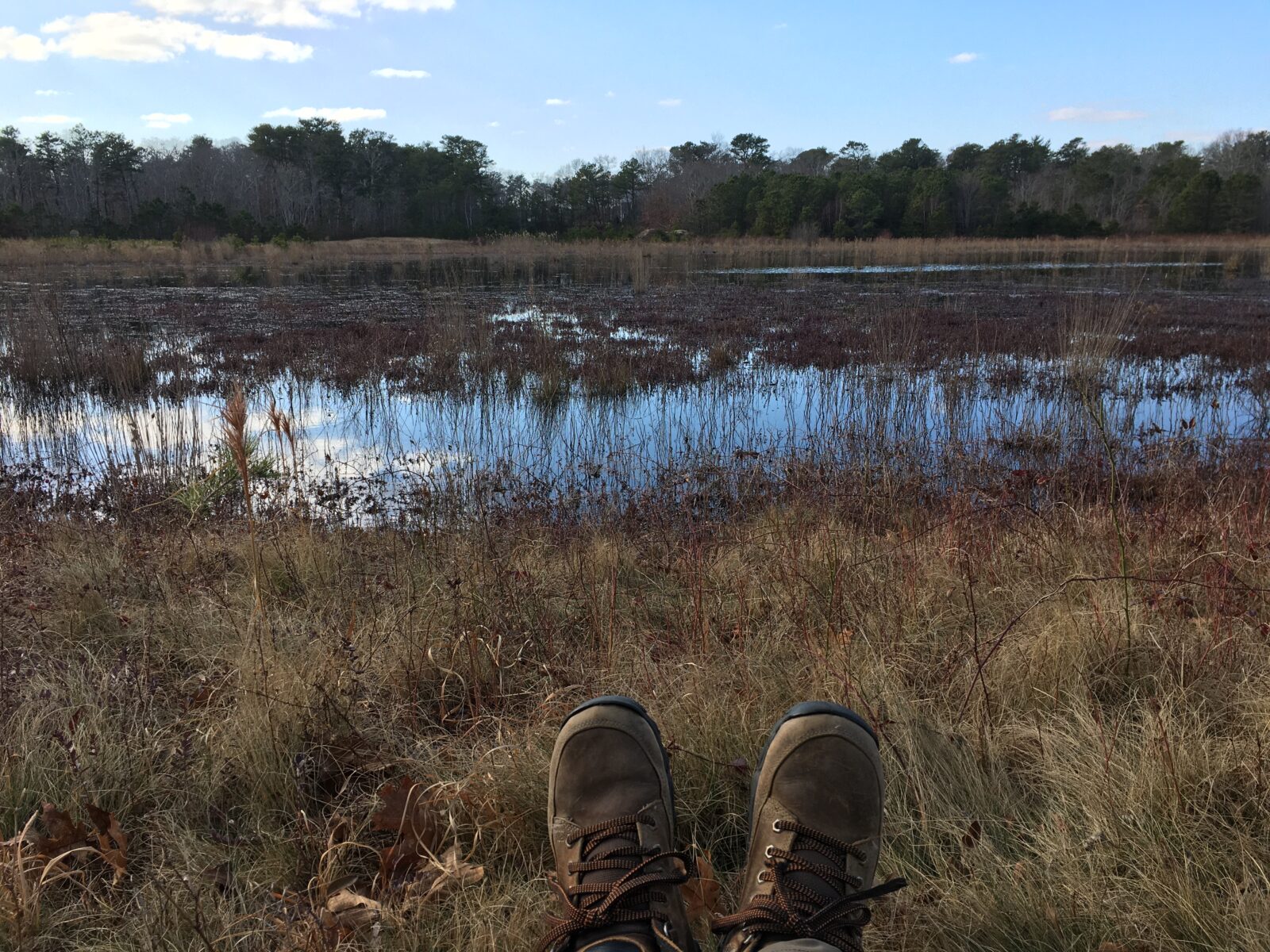 Last week, I went on a walk. The general busyness of the holidays; the short daylight of November and December; and the various minutiae I had to attend to as I continued to transition to my new home in the Bay State had left me feeling estranged from the pine barrens landscape I was supposed to help protect through my work with SEMPBA. So, I took advantage of a sunny, unseasonably mild Wednesday afternoon to ramble the trails here at Center Hill Preserve.

The weekend before, I took several of my TerraCorps colleagues on a brief hike along these same trails. To my surprise, when we reached CPH’s abandoned cranberry bog, it was filled with an acre of knee-deep water where three months before there was only an expanse of parched grasses and clubmoss. “Wow,” I told my colleagues, “I was not expecting this.” That an abandoned cranberry bog should fill with moisture during the winter months makes intuitive sense. Although not deep, the bog is a slight depression that serves as a catchment for excess rain and snow melt that, due to lower temperatures and the lower angle of the sun, is not evaporating back into the air.

But the Romantic in me wanted to see more in this giant vernal pool than just seasonal fluctuations in hydrology. This is not a personal blog, so won’t go into the details, but I went through a good deal of turbulence in the previous decade. A lot had to turn out just right amidst that turbulence for me to be able to eventually move to a new state, work full-time, and live on my own. These developments in my life have only taken shape in the past 5 months, and for the first time in many years, I feel as though I’m positively heading forward in a positive direction.

So, when I emerged from CHP’s pine-oak woods into the bog clearing during my solitary walk, I couldn’t help but see a metaphor. An oasis of rippled blue water was emerging from dry ground, and, in a few months, frogs, turtles, and insect life would be congregating at this spot for the purposes of procreation. It was as if the pine barrens were offering me a sign of better times ahead (dare I say, possibly even for the entire societal collective as we begin this new decade?)

I’m probably not the first Euro-American to read this particular landscape in such an intimate way. Henry David Thoreau, who walked through the area of Center Hill during one of his rambles to Cape Cod in the early 1850s, spent a good deal of intellectual energy probing the ways in which nature and the human soul are consanguineous. In other words, he thought nature and the human spirit mirrored each other. (You have to admit, the guy was ahead of his time; this was a full century before indigenous knowledge or concepts such as the Gaia Principle and biophilia started entering the Western conscious.)

If Thoreau were with me at the edge of the bog that Wednesday, he probably would have taken the metaphor of renewal and hope even further. He’d pull on a pair of waders, slosh out into the bog, and fish around for minnows or germinating aquatic plants (Ah, mother nature’s fecund profligacy, even in the depths of bitter winter!). But I was content to merely spread my jacket on the ground, take a seat, and watch geese play in the water instead.

Annie Dillard, one of Thoreau’s contemporary disciples, refers to chance discoveries in nature as “pennies.” She writes in Pilgrim at Tinker Creek:

“There are lots of things to see, unwrapped gifts and free surprises. The world is fairly studded and strewn with pennies cast broadside from a generous hand…It is dire poverty indeed when a man is so malnourished and fatigued that he won’t stoop to pick up a penny. But if you cultivate a healthy poverty and simplicity, so that finding a penny will literally make your day, then, since the world is in fact planted in pennies, you have with your poverty bought a lifetime of days.”

My coming across the vernal pool in the bog was one such penny, and it did in fact make my day. So what other surprises and gifts are hidden here in the Massachusetts pine barrens under the guise of “bitter winter”? I intend to find out over the next couple months, and you can too just by walking the trails of Plymouth’s numerous nature preserves (Including Center Hill Preserve). You might stumble upon a surprise that will turn a forgettable day into something worth remembering.