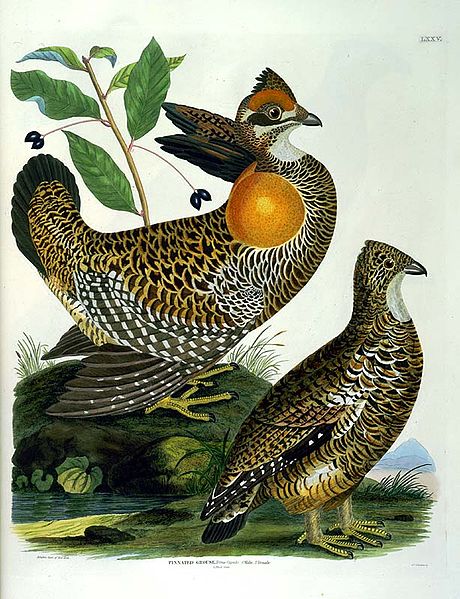 SEMPBA recently published on its website a list of every plant and animal species that has been extirpated from the Massachusetts landscape in historical times. To the best of our knowledge, it is the only comprehensive list of the Bay State’s extinct and extirpated species that is available online.

Some of the species on the list, like the gray wolf (Canis lupus) and Appalachian tiger beetle (Cicindela ancocisconensis)  have only been extirpated, meaning they can still be found in other US states or countries. Other species, like the passenger pigeon (Ectopistes migratorius) and labrador duck (Camptorhynchus labradorius) are fully extinct. All told, 46 known species have been lost from Massachusetts in historical times, most of them in the past two centuries.

The list SEMPBA published is only a list. It conveys quantitative data, nothing more. So we are left to ponder what it really means to lose a species. The world is in the midst of the sixth mass extinction in planetary history, with several thousand species disappearing every year (exact estimates vary widely). So holding in our minds the singular gravity of a lost bird or flowering plant, rather than a quantitative list, is perhaps the only way we can comprehend the rolling tragedy of shrinking biodiversity.

In order to understand the ”singular gravity” of a lost species, I trekked to Frances A. Crane Wildlife Management Area in the town of Falmouth on Cape Cod. Frances A. Crane WMA encompasses one of the largest sandplain grasslands that is managed for conservation in New England. Sandplain grasslands are prairie-like assemblages of grasses and low bushes that are dependent on periodic brush fires for perpetuation. They used to cover hundreds of thousands of acres of the Northeastern United State’s coastal areas. Now, due to urban development and fire suppression, sandplain grasslands cover less than 10% of their former area. In their heyday, these natural community types supported a population of the greater prairie chicken (Tympanchus cupido), which is now only found in pockets of the Great Plains. Sandplain grasslands were also home to the heath hen (Tympanchus cupido cupido), a related ground nesting bird whose males, like those of the prairie chicken, emitted distinctive boom sounds as part of their mating ritual.

The heath hen was endemic to coastal grasslands from Maine south to the Carolinas. The bird was said to be so plentiful and easy to hunt that early American colonists complained of eating heath hen too often; the bird’s meat even may have been served at the first Thanksgiving.

You can probably guess where this story is heading. Intense hunting pressure (by both humans and feral cats) and destruction of coastal grasslands led to the extirpation of the heath hen from the US mainland by 1870. A population persisted on Martha’s Vineyard (in what is now Manuel F. Correllus State Forest) but was decimated by a wildfire in 1916 that was worsened by fire suppression and the accumulation of dead wood. The island’s last heath hen, a male, was heard booming for a mate in the spring of 1932 and died soon after.

So loss was on my mind when I set out for Falmouth. I might see a rare moth or dragonfly in the WMA’s preserved grasslands, but not any stentorian gallinaceous bird. Even the drive through the Upper Cape was punctuated by a sense of loss; I couldn’t help thinking of how, over the decades, the generalist dry oak forests on the roadside have replaced a more ecologically dynamic mix of pine barrens, meadows, heathlands, and cedar swamps. Once I arrived in Falmouth, I could see that Frances A. Crane’s several hundred preserved acres were in fact picturesque and worth conserving; the milkweeds and dozens of other wildflowers I couldn’t identify were in bloom, and, as I mentioned, there were probably rare insects buzzing through the grassland. But the boom of the heath hen was absent.

In his essay, In a Rhino, Everything, Charles Eisenstein writes that the sadness we may feel for an extinct or disappearing species contains in it all of the grief we have suppressed in response to the other injustices of the world: poverty, police brutality, the destruction of nature’s beauty, etc. The sense of loss I felt due to the absence of the heath hen was in fact grief, and my grief was wide ranging. I was sorrowful that the wide open skies and natural beauty of the grassland surrounding me could now only be found in a few fragmented conservation areas; about the possibility of exponential global warming, which imperils even these conservation efforts; about the thousands of daily deaths due to COVID-19 and the social isolation society is practicing to prevent further fatalities.

This grief had a purpose, though. Earlier in the summer, I attended a webinar conducted by Penobscot educator, writer, and attorney Sherri Mitchell. Mitchell reminded us that when we feel grief, we are feeling the pain of all of Mother Earth, and that when we feel this planetary pain, we can effectively pray to and ask for help from the spirits. So I suppose that my grief first for the heath hen, and then for the rest of the world, was a ceremony of seeking guidance for how to live with integrity in the unravelling years of the early 21st century.

I cannot say that my vigil for the heath hen immediately led to any epiphanies or profound solace. Only now, as I think about guidance and the lessons we can learn from the heath hen’s extinction, I am remembering the words of another Penobscot tribal elder, John Bear Mitchell, which he imparted to Elizabeth Rush in her book Rising: Dispatches from the New American Shore:

“The losses [from climate change and natural resource exploitation] have been slow and multigenerational. We have narrowed our spiritual palettes and our physical palettes to take what we have. But the stories, the old stories that still contain a lot of these elements, hold on to the traditional. For example, our ceremonies and language still include the caribou, even though they don’t live here anymore. Similarly, we know the petroglyphs still exist, but now they’re underwater. The change is in how we acknowledge them.”

If physically absent animals and cultural artifacts can live on in our stories, as John Bear Mitchell suggests, then how can the heath hen live on in our collective imagination? The effort of conservationists to protect the heath hen, beginning in the late 18th century and going through the 1910s, was one of the first times in this country that a conservation project was directed at preserving an endangered bird. The effort’s failure therefore animated future conservation measures and helped prevent wildlife officials from repeating mistakes. So we could say that the spirit of the heath hen is still extant in the joy of animals that continue to thrive precisely because we learned from the hen’s extinction.

I think that when we acknowledge loss not only as an occasion for grief, but as an opportunity for learning and growth, we start getting at what it means to heal in these traumatic times. If the only stories we tell are ones of linear decline and apocalypse, we create a self-fulfilling prophecy where all the future holds is further darkness. Therefore, I’d like to think that each story that acknowledges loss, but followed by renewed resolve to protect and celebrate life, creates a ripple of light that disempowers the narrative of doom that we are all too familiar with. In this manner of mindful grieving and eventual celebration, we may be relieving – transmuting – the sorrow of all the injustices of the world.