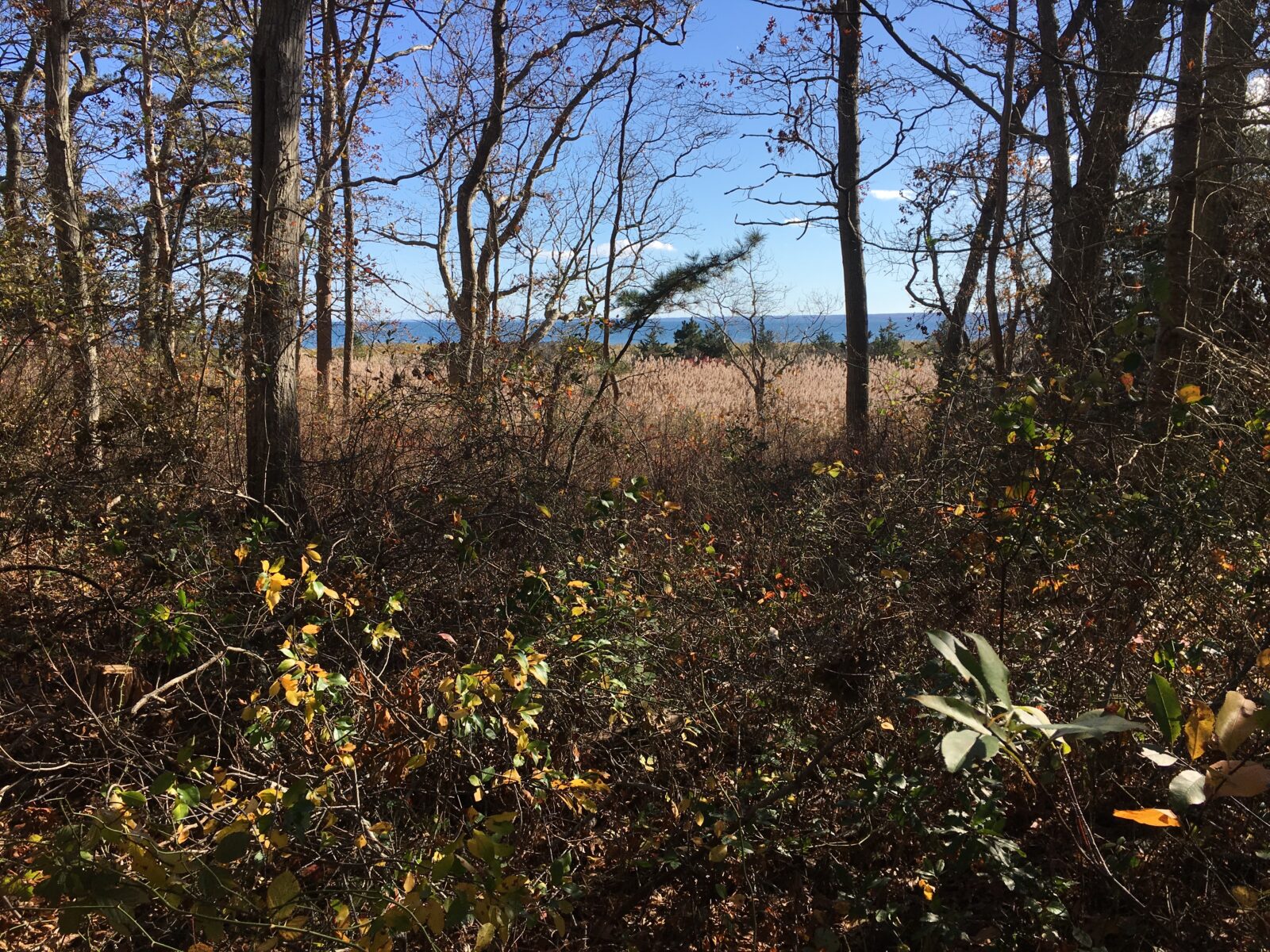 With that primer on natural communities in mind, it should come as no surprise that the coastal portions of CHP exhibit a higher number of communities than the preserve’s inland portions. The coast is a dynamic, energetic environment, which in turn gives rise to a diversity of landforms, soil types, and microclimates (at CHP, the key microclimatic factor is whether a community is within the daily reach of salt spray). Moreover, whereas the natural communities of inland CHP all belong to the terrestrial system, the natural communities of coastal CHP also belong to the marine system. The community distributions are illustrated in the following map.

More so than further inland, multiple layers of natural communities can be observed from a single location, thus illustrating the varying conditions that gave rise to each community. The first photo below features sandplain grassland in the foreground, a coastal salt pond community of common reed/phragmites (the plant that looks like wheat stalks) in the middle ground, and pitch pine-oak forest in the distance. The second photo below contrasts a stubbier maritime forest in the foreground with a taller pitch pine-oak forest; the maritime forest is a product of direct exposure to salt spray.

Another fascinating consanguinity between the the coastal natural communities was how the erosional cliff and the shoreline relate to each other. As can be seen in the map above, the intertidal zone of CPH’s beach transitions from gravel and sand to a rocky composition as it approaches the erosional cliff. I’m not a geologist, but it does not take any special training to infer that the abundance of rocks lining the northern end of CHP’s beach have their origins in the erosional cliff. The photo below captures how the cliff is studded with rocks and boulders that are in various stages of being excavated by the elements.

All 8 of the natural communities displayed in the eastern portion of CHP are already in flux given their coastal nature. But they will change even more dramatically as the tideline moves inexorably higher over the coming years. Sea levels are rising twice as fast in New England compared to the global average, an anomaly that can be attributed to the slackening Gulf Stream. I’m told that CHP’s dunes (indicated by the sandplain grassland in the map above) were overtopped by the tide during a succession of storms in March of 2017 and that Center Hill Pond used to be a freshwater community. As these changes accelerate, the pond will become a proper inlet of Cape Cod Bay, the sandplain grassland will likely be reduced in extent, and sections of the pitch pine-oak woodland will transform into a maritime forest as they are exposed to salt spray. And, of course, the maritime erosional cliff will disintegrate further.

In the near future, we at SEMPBA intend to initiate several citizen science projects with the aim of monitoring these changes occurring within CHP’s coastal ecosystem. We also hope to craft projects that will focus on the inland natural communities at CHP. Center Hill Preserve is a shifting, checkerboard landscape, and we want to take advantage of that dynamism.