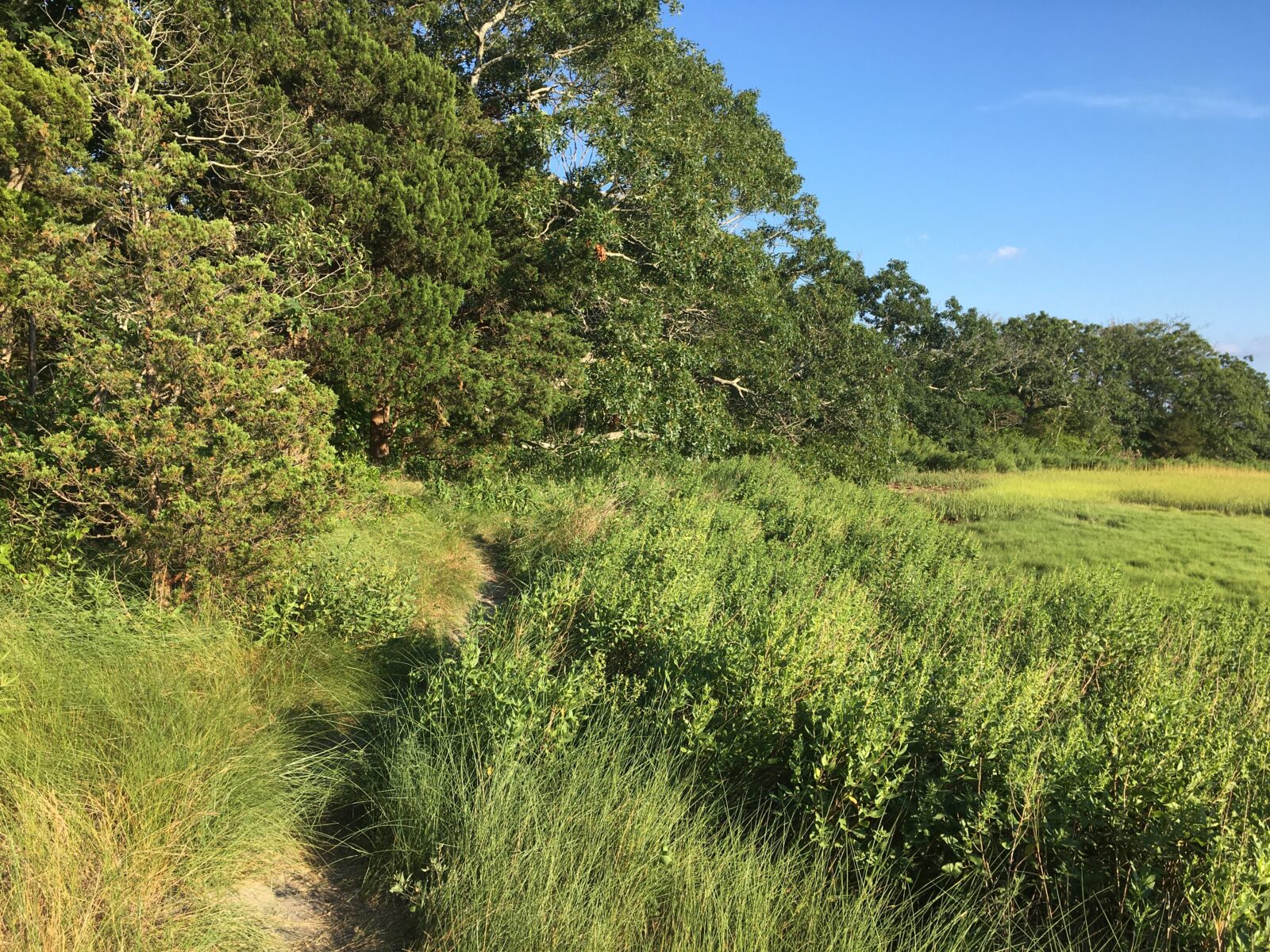 The Coonamessett River, which is fed by coldwater springs, runs less than three miles through the heart of Falmouth on Cape Cod. Yet the river used to be a rich spawning ground for eels, herring, and brook trout. Since the 18th century, dam construction along the Coonamessett to power mills has blocked many of these native fish from their spawning sites. Impoundments for cranberry farming have also created obstacles for migrating fish, while the obstruction of the river’s flow by both mills and impoundments raised water temperatures beyond what many native fish could tolerate.

Since 2015, however, the Town of Falmouth, along with organizational partners such as the Cape Cod Conservation District and the Massachusetts Division of Ecological Restoration, has been working to restore the Coonamessett River to its original state. The town has achieved this restoration by converting a cranberry bog to a naturalized wetland, planting wet meadows along the Coonamessett’s banks, removing several of the dams that used to impede the river’s flow, and installing improved fish ladders on dams that cannot be dismantled.

A couple of weeks ago, I walked a portion of the Coonamessett Greenway Heritage Trail, which parallels the restored section of the river. I had never seen the Coonamessett River before, so I do not know what it looked like when it was clogged with cranberry bogs and mills. But the Coonamessett I did see resembled an actual river, and that is important. There was the swift-flowing main channel meandering through wet meadows where spotted knapweed was in bloom. I walked above the fish ladders where water cascaded down from Pond 14. I didn’t doubt that, if I were at the same ladder in a different season, I’d see migrating fish.

The Coonamessett River restoration is only one of a multitude of ecological restoration projects in southeastern Massachusetts, many of which are concerned with restoring rivers to their original, undammed states. In Falmouth alone there is also the Quashnet River Restoration and the Child’s River Restoration.

I’ve pondered before about how the proliferation of ecological restoration projects may indicate an emerging cultural desire to see the landscapes we inhabit be restored to wilder, more organic states. Yet these restorations also point to an often-overlooked fact: restoration of natural habitats usually involves human intervention to some degree. Many people think that when we passively let things “go back to nature,” all will be well. Passive ecological restoration sometimes does work. Too often, though, when we abandon disturbed landscapes, they become colonized by invasive plants at the expense of regionally particular species. Or they may only support generalist wildlife (deer, rabbits) instead of endemic specialists. When human-altered environments include earth modifications like dams or dikes, letting things “go back to nature” can be an excuse for not cleaning up after ourselves.

Just west of Mass Audubon’s Tidmarsh Wildlife Sanctuary (which itself is a restoration project), the Massachusetts Department of Ecological Restoration has partnered with the Town of Plymouth to restore the wetlands of Foothill Preserve, which have been degraded by cranberry farming. Foothills Preserve also encompasses springs that form the headwaters of West Beaver Dam Brook. I drove by the Preserve recently and was met by the sight of construction vehicles and earth-moving machines that were temporarily idled in their task of removing dikes and dams formerly used for cranberry farming. If it takes a dozen-odd backhoes and bulldozers to undo the modifications of agriculture, then it’s questionable whether the headwaters of the West Beaver Dam Brook would ever be able to recover on their own.

In the era of COVID-19, you’ve probably become familiar with the meme that statesbhumans are a virus on the planet and that the novel coronavirus is an antibody. Proponents of such an idea point to the  images of clearer skies and frolicking wildlife in quarantined regions as proof: “See? Earth is so much healthier without humans.”

I disagree. The proposition that humans are uniquely suited for annihilation is born of the same anthropocentrism that, in a different spirit, would suggest we are god-anointed masters of the planet. Not only is human erasure from nature philosophically questionable, though. It’s also historically myopic. In many parts of the world, natural ecosystems have coevolved with human land use. Large swaths of North America, for example, were periodically burned by indigenous Americans prior to European settlement. For America’s first people, these fires improved hunting, foraging and horticultural conditions. For the environment, periodic burns created mosaics of varied natural community types that nurtured a diverse range of specialist plant and animal species. Here in southeastern Massachusetts, the entire pine barrens ecoregion evolved to be fire dependent, and the indigenous Wampanoag people reportedly set fire to alternating portions of the landscape twice per year. In the absence of this human intervention, though, the generalist, overgrown oak forests that we know today have predominated at the expense of rare species like the barrens buckmoth and the grasshopper sparrow.

But we don’t need to focus solely on the mechanics of ecosystem regeneration in order to understand the necessity of human presence in the landscape. You can come to similar conclusions on your own, in your individual wanderings outdoors.

Last weekend I returned to the juniper woodland in Ellisville Habor State Park that I wrote about in October. My time in Plymouth is coming to a close, and I wanted to wander in the location that first made me feel at home in the Bay State. This time around, the vegetation was more dense; there was more poison ivy and greenbrier between the cedar and pitch pine trees. But I still felt at home. After a sweaty hike and a tramp through overheated sand, my heart rate and breathing slowed down when I was back amidst the sandy patch of evergreen trees. And when I sat down beneath a red cedar to catch my breath, I didn’t just relax: I felt welcomed. I sensed that I mattered to this place. By making myself present to a part of the landscape that I loved, I was reciprocating nature’s care, and in that manor I was facilitating a small degree of ecological healing.

This mode of healing only makes sense if one understands that “the environment” is not an inert substrate, absent of its own desires and intentions. When we do jettison the conception of nature as unfeeling and nonliving, the truism reveals itself that every organism has its place in the landscape, including humans. At its root, I believe that most of the environmental degradation we see in our world today is the result of us removing ourselves from the landscape and thinking we can transcend material nature. But when we “return to Earth,” we come home and make the ecological picture whole again.

As I’ve written here before, I don’t think we can truly heal the planet unless each one of us does the internal work of interrogating our relationships with place. Similarly, I don’t think that a frenzy of ecological restoration projects on their own will have a lasting effect unless the architects and the citizen beneficiaries of these projects thoroughly transform their mechanistic Industrial Age mindset to one of holism and ecology. And somewhere in there, we have to let ourselves feel welcomed by other-than-human nature: the trees, the birds, and the wind. Only then can we give love back and restore the places we call home.

1 thought on “On Ecological Restoration: We Are Not a Virus”