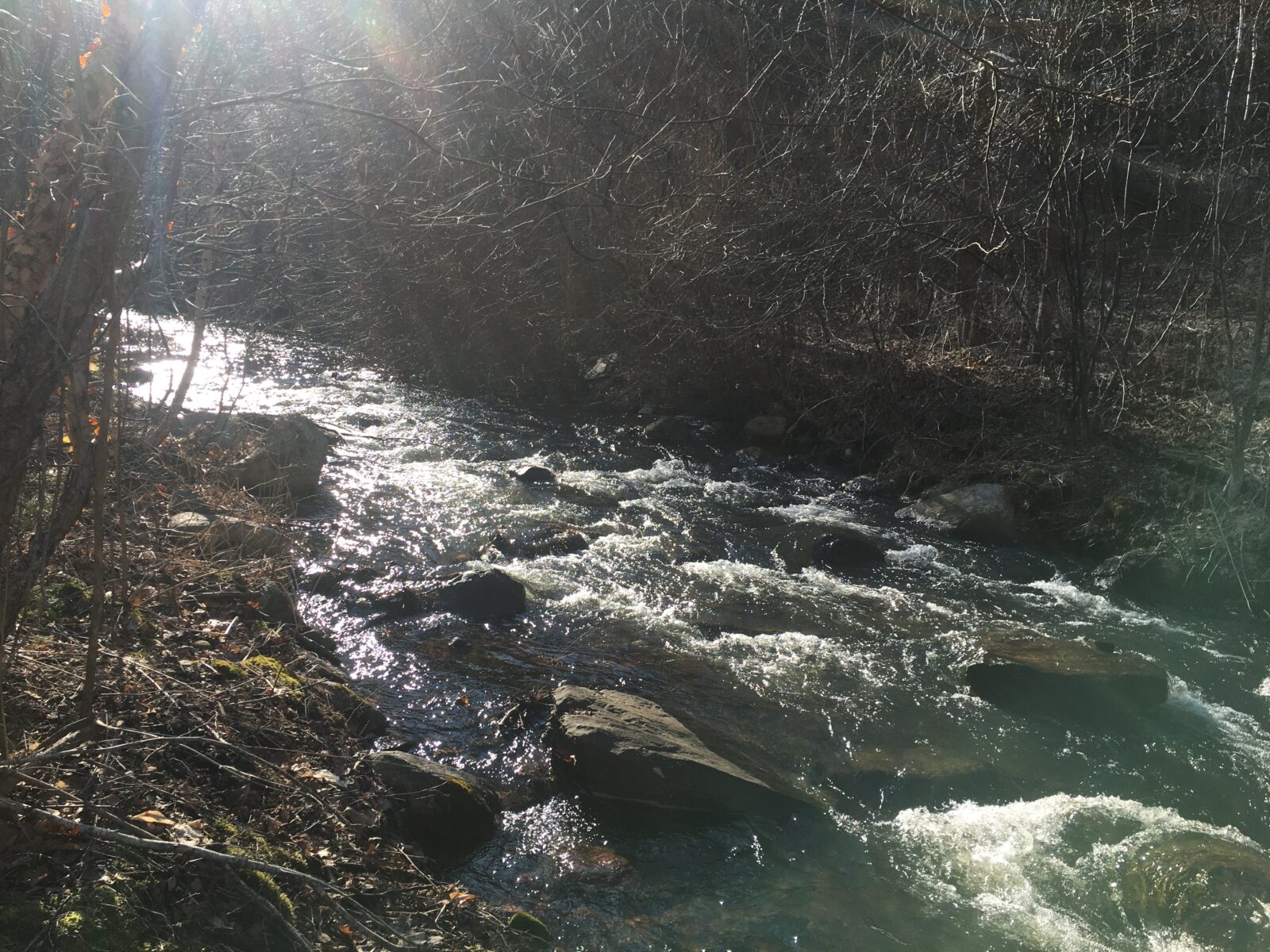 Earlier this month, Eric Hutchens, a habitat restoration specialist with the NOAA Restoration Center, gave a talk at the Wildlands Trust about his work with the center’s Fish Passage Project. Initiated in the 1990s, the Fish Passage Project has aided in the modification and complete removal of several dozen dam sites along rivers in the Gulf of Maine watershed. The goal of the project is to improve fish migration to spawning grounds, downstream sediment/nutrient transfer, flooding patterns, and a host of other riverine ecological factors.

NOAA’s first major success in this regional effort took place here in Plymouth on the 1.5-mile Town Brook, which drains the freshwater Billington Sea into Cape Cod Bay. Between 1999 and 2002, NOAA and town officials navigated, as Hutchens put it, a “permitting roller coaster” in order to remove Town Brook’s Billington Street Dam. The dismantling of Billington Street Dam was the first coastal dam removal in Massachusetts and set the stage for the partial removal/modification of 2 dam sites on the brook (Water Street Dam and Plimoth Grist Mill) along with the complete removal of the Off-Billington Street Dam, Plymco Dam, and, finally, in 2019, the Holmes Playground Dam. As recently as the 2010s, these 6 dams impeded migrating diadromous fish to the point that staff and volunteers with the Massachusetts Division of Marine Fisheries resorted to scooping up stuck fish and trucking them to Billington Sea. Now, however, for the first time in several centuries, hundreds of thousands of alewife, blueback herring, American eel, and rainbow smelt are traversing Town Brook with minimal obstruction.

At one point in his presentation, Hutchens showed the audience a photograph of the top of Holmes Playground Dam, which was capped with blacktop and a sad looking basketball court. When I saw that image, I was reminded of the lyrics from Joni Mitchell’s “Big Yellow Taxi:” They paved paradise / Put up a parking lot. (Fun fact: during the dismantling process, work crews really did excavate the frame of a car from the dam’s foundation.) Last weekend, I visited the former site of Holmes Dam. Compared to the sad blacktop of yesteryear, the free-flowing Town Brook with its restored streamside habitats may as well have been paradise.

Recent developments on Town Brook are part of a much larger cultural trend in America in which states, municipalities, the federal government, and private citizens are rethinking the fundamental wisdom of damming waterways. According to the advocacy group American Rivers, which maintains a database of dam removals going back more than a century, 1,476 dams have been dismantled in the United States in the past 30 years alone (compared to the dismantling of 246 dams nationwide between 1912 and 1989). Many of these deconstructions come down to cold, hard economics. Reservoirs behind dams may silt up to the point that they aren’t producing any hydropower or drinking water. Particularly old dams (especially in the eastern US) may have outlived the purposes they were originally built for, such as powering mills. And, as Anna Lieb at Nova Science illustrates, at least one third of dams constructed in the US through the 20th century did not have any defined purpose at all. Such dams are categorized in the national inventory as providing ambiguous “recreational” services instead, and are now too expensive to maintain. (Why did these dams go up in the first place? My theory: They are emergent features of our cultural fixation on economic growth and productivity.)

Yet, as I experienced myself when I walked along Town Brook, there is something undeniably heartening when a river is allowed to return to its wilder state. To see herring swimming upstream where once there were ugly concrete blockades and stagnant pools of water, we are invited to entertain a different narrative of our relationship with nature. This new story is one in which the exigencies of beauty, joy, and ecological holism have replaced the exhausting “mentality of control,” as Charles Eisenstein calls it. I believe the economic justifications for the national spate of dam removals in the past 20-30 years are animated by an awakening, fundamentally human desire to see such beauty, joy, and human-nature interconnection return to the landscapes we inhabit.

Here’s another fun fact: the first dam ever erected in the present-day US was built in 1640 by Puritan settlers in nearby Scituate. It is perhaps appropriate, then, that America’s Hometown should be at the vanguard of river restoration. In the past 15 years, Plymouth has also seen the dismantlement of the Robins Dike Dam on Red Brook; the Beaver Dam Brook Dam; Wellingsly Dam #3 on Wellingsly Brook; and Sawmill Pond Dam on the Eel River. Unlike the Pilgrim/Puritan story of settlement for which the Plymouth area is renowned, you don’t have to limit your exposure to the dam dismantling movement by reading books or watching reenactments. The living landscape of Plymouth is being revived right before our eyes. And all you need do to witness this spectacle is take a walk along Town Brook or any other of our recently liberated waterways.